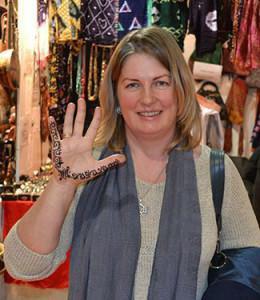 People often ask me, how did it all begin? How did it happen, that after graduating from the building college I started to do completely different thing? Crafting convenient bags, belts and other good and useful stuff is my main occupation for more than twenty years.
It all started with the purchasing of a small piece of shoe leather in the Armenian shoemaker shop in the Kharkov city. It was almost impossible to buy a good leather in 1988. There were no special shops for needlework. Therefore the purchase of this piece of leather was a big success. I sewed my first purse from this piece of leather. All the joints were made by hand. I used the red-hot nail to make pretty complex drawing as a decoration pattern. It turned out very beautiful. It was not only me, who liked it. I showed this wallet to my friends and they immediately bought it. So I realized that it was not only a pleasant and interesting thing, but I could earn good money using this skill. I was trying to sew clothes from the leather and it was successful too. My friends were buying it with pleasure. At that time, in the late 80′s Soviet Union there were no private workshops. People were ready to buy all clothes with interesting design. At that time, I have already met my husband, Vladimir Nakonechny. We began to work together. And then we realized that we needed professional knowledge in order to make a progress in the field of design, and not just be a small artisans. So we began to study. We went to the best Kharkov sewing school. We brought our drawings and patterns of clothes on examination and were immediately enrolled.
Along with studying we have continued to design clothes and sew them out of leather. I bought an old Singer sewing machine, which I found in the ad from a newspaper. Using this sewing machine we sewed our first stuff. After graduation we became professional fashion designers. We realized that we want to continue to work with the leather in different directions. Vladimir began to work in the shoes production. He and his brother formed their own shoe shop, which still continues to operate successfully.
I chose a dry-goods line: bags, belts, covers for books and documents and so on. I realized that I am interested in creation of design for these things. I wanted to develop interesting and comfortable design and work as an artist at the same time. Gradually, over several years, I have